Staying on or getting off the sidewalk? Testing the Mehrabian-Russell Model on pedestrian behavior

Social and environmental psychology provide a variety of models based on which to understand how built environments can elicit people’s behavioral responses. The Mehrabian-Russell model (MRM), initially presented in 1974, provides a framework that explains avoid–approach behavior towards a place based on a primary emotional response (PER) and affective states elicited by the perceived stimuli from the environment. However, despite the potential applications of the MRM in travel behavior studies, traditional models (e.g., discrete choice models and integrated choice latent variable) do not incorporate this specific psychological process that converts environmental stimuli into behavioral responses. Hence, this paper aims to test the applicability of MRM to urban sidewalks. To fulfill this objective, we developed a two-level structural equation model using latent variables (LV) identified from a confirmatory factor analysis (CFA) based on 1056 in-person surveys on 30 different sidewalks in Bogotá, Colombia. We then evaluated the effect of the PER on declared avoidance as a proxy of behavioral intention. The CFA uncovered three LV equivalent to the three affective dimensions of the MRM—arousal, pleasure, and dominance—followed by a fourth LV, representing the PER, which explains the three previous LVs. This confirms the applicability of these kinds of psychological and environmental models in pedestrian behavior evaluation. We found that PER can explain the declared intention of avoidance towards the sidewalk in an urban setting. Proving that this kind of model can explain the way in which the built environment can elicit pedestrians’ emotional responses and subsequent behaviors, provides information that can be used as input in travel behavior studies focusing on the promotion of active traveling and mode change.

Acceso al Artículo: Staying on or getting off the sidewalk? Testing the Mehrabian-Russell Model on pedestrian behavior - ScienceDirect 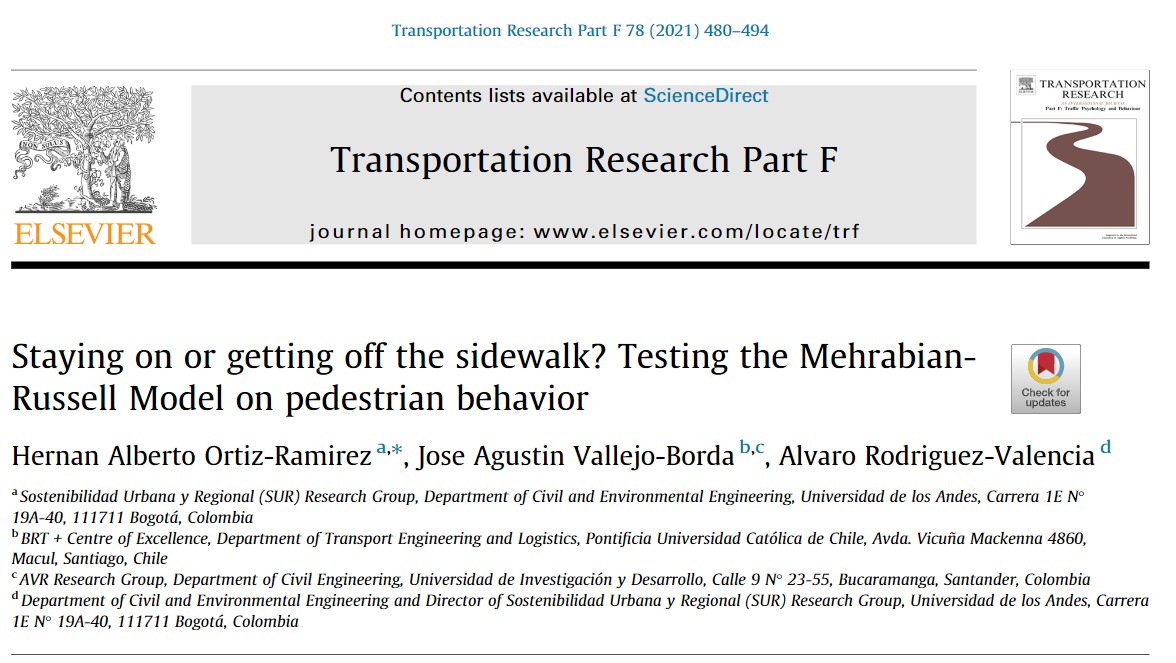